Tesla and SpaceX CEO Elon Musk said Monday that his neurotechnology company Neuralink could kick off human trials by the end of 2021 if “things go well.” The San Francisco Bay Area-based company co-founded by Elon Musk in 2016 is aiming to create brain-to-machine interfaces by implanting a computer chip in the human brain.

The outcome would be to help treat degenerative neurological conditions such as Alzheimer’s disease, dementia, and spinal cord injuries. The in-brain chip could allow humans with degenerative neurological disorders to control technology — including smartphones or mobile devices — with their thoughts. Moreover, the interface would also help treat conditions, such as hearing loss, memory, depression, brain injury, and even paralysis and blindness.

Over the long haul, the startup is looking forward to achieving a level of synergy between humans and artificial intelligence (AI).

On Twitter Monday, Musk provided the timeline to another user’s request to participate in the human trials of the implantable computer chip.

Hammon Kamai wrote to Musk on Twitter saying, “I was in a car accident 20 years ago and have been paralyzed from the shoulders ever since. I’m always available for clinical studies at @Neuralink.”

In response, Musk said that human trials could potentially begin by the end of 2021. 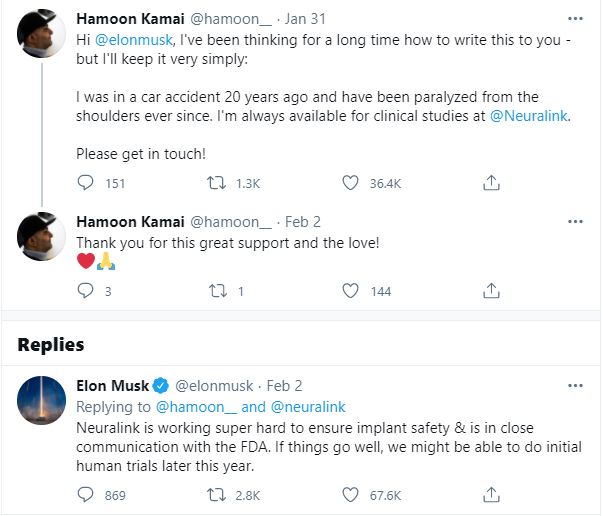 He tweeted, “Neural is working super hard to ensure implant safety and is in close communication with the FDA. If things go well, we might be able to do initial human trials later this year.”

Previously, CEO Elon Musk has made similar statements about the project stating the company would begin human trials by the end of 2020, which didn’t happen.

On Sunday, he said in a statement on the private social app Clubhouse that his neurotechnology startup Neuralink implanted a chip in a monkey’s brain that enabled the primate to play video games using only its mind.

He added: “You can’t even see where the neural implant was put in his brain, except for the fact that the monkey’s got a slight like dark mohawk.”

Since its inception, Neuralink has been testing such implantable interfaces. Last year, the company successfully implanted computer chips in pig brains and displayed neural signals from one of the animals in real-time. 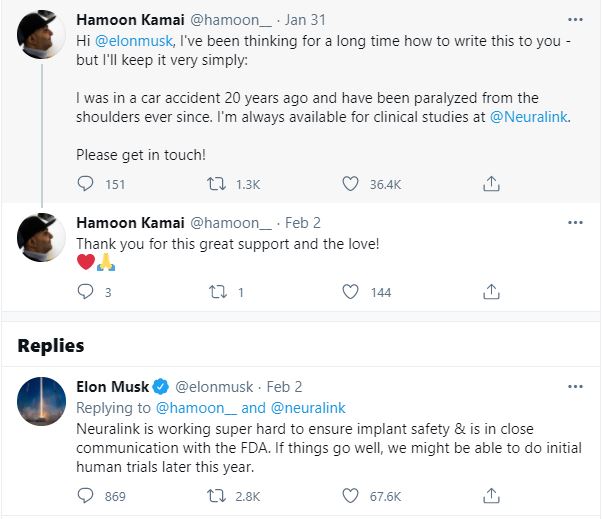 Musk explained that over the past few months the company has “dramatically simplified” the computer chip. In its previous design, the wearable device took the shape of a bean that would sit behind the ear. The design was complex, and the person wearing it wouldn’t look totally normal, implying they would have a device behind their ear. Recently, the company simplified the design to something that is about the size of a large coin that would eventually be implanted in the skull.

The chip is designed to substitute a coin-sized portion of the skull and sit still, so it wouldn’t be physically noticeable. Moreover, it would be inductively charged, similar to the way a smartphone or a mobile device is charged wirelessly. The industrial design for the surgical robot — programmed to implant the neural threads safely inside the brain — was performed by Woke Studios, a U.S.-based design company.

The robot was designed and programmed in such a way to insert the neural links within an hour without general anesthesia, with the potential candidate being able to leave the hospital on the same day.

In a live event, Musk said that his team ultimately wants this robot to essentially perform the entire surgery, including incision, removing the skull, inserting the electrodes, placing the wearable device, and then getting done with the surgery.

“We want to have a fully automated industrial robot,” he added.

Musk referred to the device as “a Fitbit in your skull.”